Arteries of the city

I created this graphic back in October shortly after Hong Kong's Transport Department released their annual traffic census. The 182-page report was packed with statistics and useful information but the best data was a thorough breakdown of daily traffic on almost every stretch of road. The territory has hundreds of counting stations. We thought the chance to do something with these numbers was too good to miss so we pitched an analysis to the Editor who was keen to give it a good space. 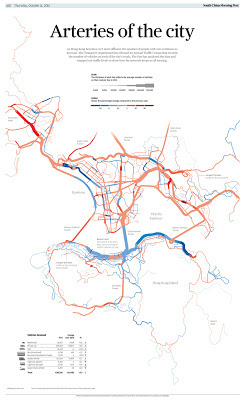 The thickness of each line represents the average daily number of vehicles traveling on that stretch of road. The colour represents the percentage change on last year. This helps the reader to explore the data in two ways. You can clearly see that the main roads along the front of Hong Kong Island are still the busiest. But by the colour, the traffic has also mostly decreased compared to last year. You can also see that a lot of the roads in Kowloon have become busier. In particular the area up to the left, Tsuen Wan, the three tunnels north and the major highways to the east.

There is also a clear change in the cross-harbour tunnels. The Eastern and Western Harbour Tunnels have increased in traffic compared to the central tunnel which has decreased. But they still see less traffic.

The graphic is also a fun way for the reader to take a look around their neighbourhood or route to work.

Posted by Unknown at 5:04 AM No comments:

Roadside pollution in Hong Kong hit a record high this year, on August 2 in Central, with the index reaching 212. As the year drew to a close, we took a look at how the air had fared in every hour in the year up to the publishing date. 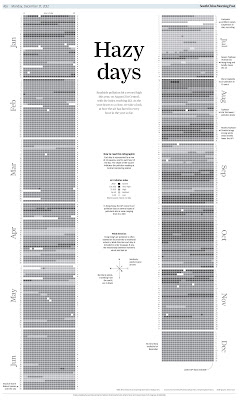 Each day is represented by a row of 24 squares, one for each hour of the day. The shade of the square indicates the pollution reading at Central monitoring station. 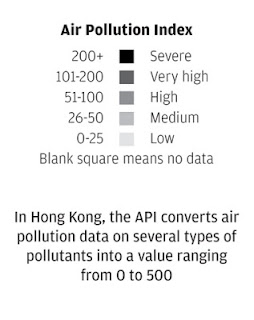 The idea was to give the reader an overall glance at the year so they can see the worst and clearer periods, but also the opportunity to dig a little deeper into the hourly data. We also added some text pointers to explain some probable contributing factors to clearer air such as typhoons.

Hong Kong’s air pollution is often blamed on its proximity to mainland China’s industry. Wind direction each day is included as small arrows to the left of each row in order to gauge, if any, the relationship between northerly winds and bad air. 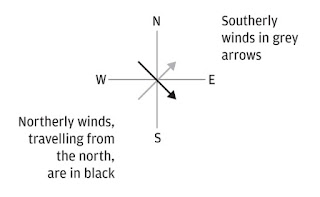 We wanted the reader to come to their own conclusion about the relationship with wind direction but it turns out a lot of the bad spells coincide with winds from the North (black arrows). See below. 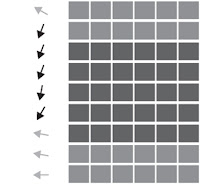 The graphic was published as a full broadsheet back page near the end of December.

Posted by Unknown at 4:26 AM No comments: